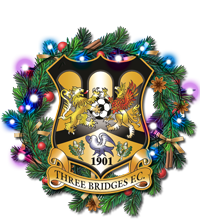 Bridges out of FA Trophy

Out of the F.A.Trophy against a side who had won just once this season and were able to celebrate progressing in this competition for the first time in eight years!

But a bizarre injury to referee Samuel Read, who seemed to twist his ankle as he was running backwards, proved fatal not just to him but also to Bridges, who were knocked out of their stride by a fifteen minute break in proceedings. Sadly, Mr. Read’s replacement, Assistant Neo Neophytou, was not up to standard for much of the time, and both Michael Wilson and Tadley Bromage can count themselves unfortunate to have picked up yellow cards for accidental infringements.

But all the blame couldn’t be attached to the officials as Bridges allowed themselves to be overrun at times by a Staines side intent on impressing Interim Manager Jack Porter. Daniel Smith had read a good through ball shortly before the break, but eight minutes into the second half Wilson lost possession and a swift through ball gave David Pitt the opportunity to slide the ball past Smith for the precious opening goal.

Hall, who never stopped running and hassling, and Doughty both created half chances for the visitors, but after 67 minutes substitute Omar Watt Ndongo, only on a minute earlier, created the opening for Noah Amissah to finish clinically.

It could have been worse for Bridges five minutes later as Smith saved from Amissah and Ndongo made a hash of the rebound. Bromage headed wide from Gayler’s corner as Bridges tried to breathe life into their challenge, but after 77 minutes a foul by the otherwise impressive Rhys Paul on Ben Aubrey led to a mass brawl with these two both being shown red cards.
A foul on Dan Perry after 84 minutes gave Bridges a lifeline as Brannon O’Neill coolly despatched the resulting penalty, but two minutes later Staines caught them with a swift counter attack that was finished well by Jack Torbett.

A couple more needless bookings for Staines and a good free kick by Gayler that was pushed away by Ringer brought the game to its conclusion, and while the home side celebrated a rare victory, Bridges were left to rue on what might have been until that unfortunate injury to the referee.